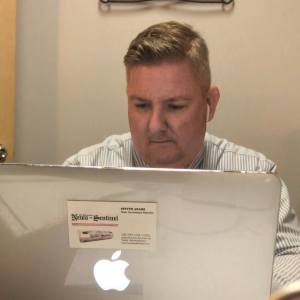 Steven Allen Adams is the state government reporter for The Parkersburg News and Sentinel, The Intelligencer/Wheeling News-Register, The Weirton Daily Times, The Inter-Mountain in Elkins, and The Journal in Martinsburg.

Adams returned to journalism after five years in government communications, working for the Democratic and Republican majorities in the West Virginia Senate as a communications specialist, and as the assistant communications director for Secretary of State Mac Warner. Before that, Adams was an award-winning radio news reporter, a city editor for a weekly newspaper in Ohio, a statehouse reporter for a non-profit libertarian think tank, and a TV news producer for a five-station network in West Virginia.

Adams is a two-time winner of the West Virginia Broadcasters Association award for best sport news coverage for his election night reporting. The Washington Post named Adams one of the best state-based political reporters in 2009. He was also named a 2012 Generation Next: 40 Under 40 by The State Journal.